How to Discern the Wheat From the Tares? I Have a Practical Knowledge of This Question

The Bible records, “Another parable put he forth to them, saying, The kingdom of heaven is likened to a man which sowed good seed in his field: But while men slept, his enemy came and sowed tares among the wheat, and went his way. But when the blade was sprung up, and brought forth fruit, then appeared the tares also. … Let both grow together until the harvest: and in the time of harvest I will say to the reapers, Gather you together first the tares, and bind them in bundles to burn them: but gather the wheat into my barn” (Matthew 13:24-26, 30). Whenever reading the parable of wheat and tares, I realized that the Lord Jesus would do the work of conclusion and winnowing in the last days, through which He would separate true believers from false believers, thereby bringing the true believers into the kingdom of heaven, and eliminating and destroying the false ones. Although I understood this theoretically, I was not quite clear about how to distinguish wheat from tares. How does God reveal these two kinds in reality and how can we have some knowledge and discernment of them? This question had been preying on my mind, making me frequently pray and ponder.

One day during my spiritual devotions, I pondered this passage once again. Joining with reality, I considered: When the Lord Jesus came to earth to do His work, He walked out of the law of the Old Testament and brought the new work of the Age of Grace, spreading the way of repentance. On the Sabbath, He got people to pull out the calves that had fallen into a pit, restored the withered hand, and allowed the disciples to pick and eat the heads of grain, breaking the regulations of the law. Then those scribes and Pharisees said that the Lord Jesus broke the law by not keeping the Sabbath and thereby tried to find all kinds of accusations against Him and condemned and slandered His work. On the contrary, those who accepted and obeyed Him after hearing His words and seeing His deeds, they returned to Him and obtained His salvation. The Lord Jesus said, “He that believes on the Son has everlasting life: and he that believes not the Son shall not see life; but the wrath of God stays on him” (John 3:36). From this I knew that those who received His gospel and those who did not were obviously divided: Those who believed that the Lord Jesus was the Son of man, which was to say, recognized that God incarnate came to work and recognized that the Lord was the Messiah, they could accept the name of the Lord Jesus, and then prayed to Him to confess and repent. So they were forgiven of their sins and would not be condemned or cursed by the laws anymore, which meant that they were saved. There were also those true believers in the Lord who lived by His words, and were capable of having real faith in Him regardless of what trial or suffering they encountered. They were just like wheat with life, which was able to bear the fruit of faith, and would certainly gain the Lord’s blessing and grace. As for those who resisted the Lord Jesus—the chief priests, scribes, Pharisees, and the Jewish people, they did not acknowledge that the Lord Jesus was the upcoming Messiah, and did not accept His name, His work or words. Instead, they still held onto the laws of the Old Testament, and prayed to the name of Jehovah God. As a result, they were all exposed and eliminated by God’s new work, just like the tares without life being winnowed out. Similarly, with regard to those who are not true believers but seek bread to satisfy hunger though having accepted Jesus’ gospel, they simply focus on keeping religious ceremonies in their belief in the Lord. They go to church on weekends. When reading the Bible in ordinary life, they are merely satisfied with understanding some letters and doctrines, but never seek the Lord’s will or demands carefully in His words or pay attention to practicing His words. When praying, they speak a bunch of empty phrases, instead of speaking intimately to the Lord. Some of them even have no normal spiritual devotions but still can follow the trends in the world, falling into sin and living a life the same as the unbelievers. They are not believers; they are false believers, and will surely suffer the Lord’s loathing and hatred. In comparing that, my heart became much more enlightened: So, the true believers, the false believers; the tares and the wheat. They are revealed by the work of the Lord Jesus incarnate, that is, revealed when Christ begins His new work in the new age. Besides, when believing in God and experiencing the work of God, whether we treasure His work and words, get close to Him regularly, focus on seeking and practicing the truth when encountering problems, and lead our lives according to His words; this is also the key to revealing whether we pursue the truth, and whether we are the true believers or fake followers.

Now is the end of the last days—the time for the Lord to return. Similarly, of all Christians, who are the tares and who are the wheat can only be discerned and revealed through His return. So how can all such things be made clear when He comes again? In my search, I thought of the scripture, “It is time for the judgment to begin from the house of God” (1 Peter 4:17). The Lord Jesus said, “And if any man hear my words, and believe not, I judge him not: for I came not to judge the world, but to save the world. He that rejects me, and receives not my words, has one that judges him: the word that I have spoken, the same shall judge him in the last day” (John 12:47-48). “For the Father judges no man, but has committed all judgment to the Son. …” (John 5:22). “And has given him authority to execute judgment also, because he is the Son of man” (John 5:27). From these verses we can see that God will come again to do the work of judgment in the last days, moreover, judge people as the Son of man. This is because only when God incarnates Himself can He become the Son of man. In this light, when the Lord Jesus returns, He will be incarnated again to do the work of judgment. If we can know and accept God’s work of judgment, we will have the chance to be purified and saved by His work, and gain life, thus coming back to God’s family, just like the full kernels being gathered into the granary. If we are incapable of accepting the work of judgment of Christ of the last days, or incapable of truly pursuing after accepting it, then we will be the revealed tares in God’s work and will definitely be blown away by the wind, which is to say, be exposed and eliminated by His work of judgment in the last days. This depends on whether we people in the last days can know and accept it. Ultimately, God will gather His wheat into the garner, and burn the tares with fire. That is, He will bring the true believers, who are utterly purified and saved, into His kingdom. Afterward, He will use great disasters to punish and destroy all unbelievers and wicked people who have done much evil but never repent. Then, God’s work of saving us mankind will have concluded.

Previous: The Clever Samaritan Woman – Recognized Jesus As the Messiah

Next: What Does “Born Again” Mean? How to Get Reborn?

Genesis 6:13 13And God said to Noah, The end of all flesh is come before me; for the earth is filled with violence through them; and, behold, I will destroy them with the earth.

By Li Zhi I believe that everyone knows well the story of Job. When his property was all taken away, his servants were murdered and his children had their lives taken, Job still revered God and shunned evil and didn’t sin with his tips. Moreover, he said a ...

Jesus answered them, “Truly, truly, I say to you, everyone who commits sin is the slave of sin. “The slave does not remain in the house forever; the son does remain forever. 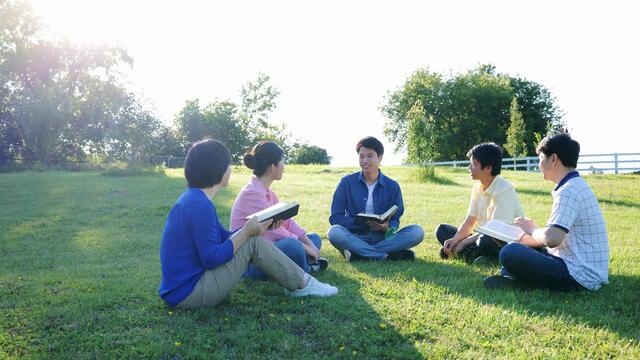 How to Give Effective Help and Support to Brothers and Sister: Grasp 3 Principles

By Yinzi The Bible says, “But the end of all things is at hand: be you therefore sober, and watch to prayer. And above all things have fervent charity among yourselves: for charity shall cover the multitude of sins. Use hospitality one to another without gr...

Exodus 16 – Manna and Quail from Heaven

Manna and Quail from Heaven (Exodus 16:1-21) And they took their journey from Elim, and all the congregation of the children of Israel came to the wilderness of Sin, which is between Elim and Sinai, on the fifteenth day of the second month after their depart...